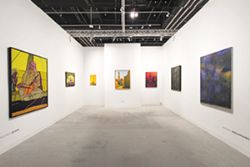 The annual art fair each November is the culmination of the year-round visual arts programme. The fair brings together a number of local and international galleries offering artworks for sale which are shown alongside exhibitions, artist commissions and installations both at the fair and across the emirate.

Dep Art Gallery wants to introduce itself to international collectors of Abu Dhabi Art Fair by offering a curated project based on three Italian painters. Born between the 1930s and 1940s, they all lived through an era of change and globalization and were all great travelers. Interest that is revealed in their paintings.

Valerio Adami (b. 1935), Natale Addamiano (b. 1943) and Salvo (1947 - 2015). The choice, is oriented to three artists whose immediately recognizable painting brings back, albeit in different ways, memories of travel and desire to relive such moments. The choice obviously took into account the interest in international collecting, which is also attentive to investment, especially for the names of Valerio Adami and Salvo, while with Natale Addamiano, an interesting collaboration for site-specific works is possible.
To hint at the different poetics Valerio Adami in his paintings usually depicts characters encountered in his travels, special characters who are caught in a moment, while playing an instrument, dancing or simply being in a special place. Salvo, on the other hand, is famous for his landscapes or architecture, memories of all the places he has visited. Natale Addamiano, on contrast, with his starry skies, prefers not to declare the place of which those stars bring memory, being for him an exercise in meditation and remembrance but leaving the viewer free to relive his own private feelings. They are global stars those of Addamiano, they could be in a desert or on the highlands of southern Italy, it could be the moon and often just the stars above the sea.

Find more information related to the fair on the event's official website:
https://www.abudhabiart.ae/ 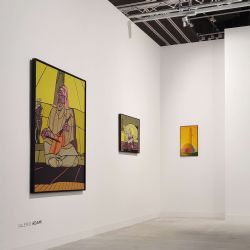 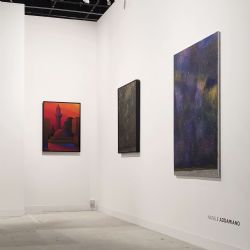 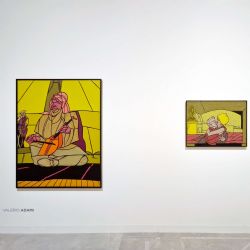 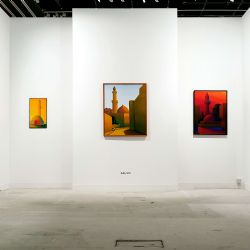 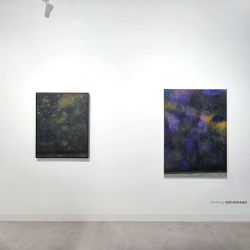